By far the saddest line in this story is, “Even his family had forgotten about him.”

An Indian man who spent more than 50 years in jail without trial has been awarded 300,000 rupees ($6,800; £3,800) compensation by the Supreme Court. The court also awarded 77-year-old Machang Lalung 1,000 rupees a month.
Mr Lalung was arrested in his village in the state of Assam in 1951 and charged with “causing grievous hurt”.
He was shunted around jails and psychiatric hospitals until local rights activists took up his case. Even his family had forgotten about him.
…
Mr Lalung’s initial charge of “causing grievous hurt” would normally carry a 10-year sentence if proven.
Police soon said there was no evidence to support the allegation and within a year of his arrest, Mr Lalung had been transferred to a psychiatric institution.
In 1967, the authorities at the institution certified Mr Lalung as “fully fit” and said they intended to release him. But instead of being freed, police transferred him to another jail. They did not send him to trial but just kept him in prison.
…
Mr Lalung was finally freed in July last year after paying a token personal bond of one rupee.
Magistrate HK Sarma, who had ordered the release, lashed out at the Assamese and Indian “snail-paced and inefficient” legal system. “Neither the executive nor the judiciary can avoid responsibility for Machal Lalung’s detention for so long on the grounds of mere procedure or technicalities,” he said.
“At stake is the question of life and liberty of a person in judicial custody for 54 years, who was not brought to trial even long after his recovery from mental illness.”
Sanjay Borbora, Assam’s leading human rights activist, said: “He is a simple villager and his life has been destroyed by a cruel system. “He should sue the authorities for millions of rupees but I don’t think he is even aware he could.”
Mr Lalung is now staying with his nephew, Badan Pator, a poor farmer who himself has just a small piece of land to eke out a living for him, his wife and his son.
“Ours is a poor family. We look after him as best as possible. We know he is not happy here. But what else can we do?” said Mr Pator. 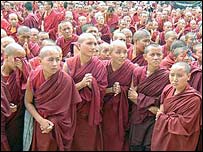