Oh, they apologized. Must have just been an innocent mistake….. (rofl)

WASHINGTON (Reuters) – The U.S. Capitol Police dropped charges against activist Cindy Sheehan on Wednesday and apologized for arresting her in the House of Representatives chamber shortly before President Bush’s State of the Union address.
Sheehan, who became a central figure in the U.S. anti-war movement after her son Casey was killed in the Iraq war, was taken from the Capitol in handcuffs and charged with unlawful conduct after refusing to cover an anti-war slogan on her T-shirt.
The Capitol Police said in a statement that it had reviewed the incident and determined the arrest was unwarranted.
“While officers acted in a manner consistent with the rules of decorum enforced by the department in the House Gallery for years, neither Mrs. Sheehan’s manner of dress or initial conduct warranted law enforcement intervention,” the statement said.
Capitol Police Chief Terrance Gainer also apologized to the wife of a House Republican who was told to leave the chamber during Bush’s speech for wearing a shirt bearing words of support for U.S. troops.
Rep. Bill Young of Florida had condemned the treatment of his wife, Beverly. Young, who chairs the House Appropriations defense subcommittee, said on the House floor his wife was called “a demonstrator and a protester” for doing what Bush had asked of Americans: supporting U.S. soldiers serving in Iraq.
The Capitol Police statement said neither guest should have been confronted about her expressive T-shirt.
“The officers made a good faith, but mistaken, effort to enforce an old unwritten interpretation of the prohibitions about demonstrating in the Capitol. The policy and procedures were too vague,” Gainer said. “The failure to adequately prepare the officers is mine.” 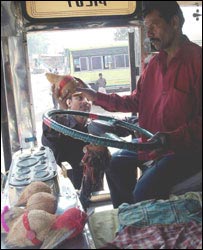