When I saw this story, I thought that the idea of activists trying to seize someone’s home was frightening and that the activists were going too far. Then I figured out what they were responding to (and that “seize” didn’t mean “storm and occupy”)…
The government can now seize homes for “public benefit” – like to put in a new convention center or hotel, if they think it would benefit the area. The previous wording was “public use,” implying land could be seized for something like a highway.

Activists angered by a US Supreme Court ruling that homes can be demolished for public developments are trying to seize the home of one of the judges involved.
About 60 people rallied in the small New Hampshire town of Weare on Sunday, where Justice David Souter has a house.
The protesters say they have enough signatures from Weare residents to put their proposal to a town vote in March.
They want a compulsory purchase order on the 200-year-old farmhouse, and say they will build a hotel in its place.
Campaign organiser Logan Clements, from Los Angeles, told supporters in Weare the Supreme Court had “shot a hole in the [US] Constitution”.
Judge Souter was in a 5-4 majority on the court panel that ruled last June that the city of New London in Connecticut could seize homes to make way for a hotel, convention centre, office space and flats. 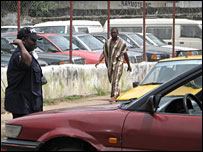