Wow! That is really all I can say. I guess it really isn’t ever too late. It’s hard to tell for sure, but she looks pretty good for a 62 year old mother of 12, grandmother of 20, great grandmother of three. I just found another story online that says that in addition to being diabetic, she has been blind since birth.

Wulf is used to defying the odds. Blind since birth, she was a synchronised swimmer in high school, worked as a piano and organ saleswoman and developed a passion for cooking.
Wulf said on Friday that she considers her late-in-life pregnancy a groundbreaking act for older women.
âAge is a number. Youâre as old as you feel,â? she said. â?Every time you revolutionise something or you do something different, thereâs going to be naysayers.â?

Fourteen years older than her husband. I think that’s about the same age difference between my Mom and step dad. They also live in Redding. I hope this doesn’t give them any ideas….
cd

REDDING, Calif. – A 62-year-old woman gave birth Friday to a healthy 6-pound, 9-ounce baby boy, becoming one of the oldest women in the world to successfully bear a child.
Janise Wulf gave birth to her 12th child. She is also a grandmother of 20 and a great-grandmother of three.
Family members said the delivery went smoothly, despite earlier concerns about the mother’s health. Wulf, a diabetic, experienced swelling and higher blood pressure earlier this week, prompting doctors to perform the Caesarean section a week early.
Wulf and her third husband, Scott, 48, named the red-haired boy Adam Charles Wulf. He follows just 3 1/2 years behind his older brother, Ian.
“I hate to raise one alone, without a sibling,” said Wulf, who was impregnated both times through in vitro fertilization.
The oldest woman on record to give birth is a 66-year-old Adriana Iliescu of Romania, who had a Caesarean section Jan. 15, 2005.
The Guinness Book of World Records also lists two 63-year-old women who have given birth: Rosanna Della Corte of Italy in 1994 and Acheli Keh of California in 1996. News reports, however, list Della Corte’s age at 62 when she gave birth. 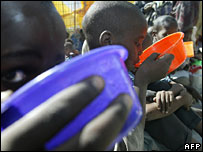