This is the most ridiculous thing ever!!! Can you believe these guys push all this patriotic bullshit on all of us Americans, no matter what language we speak, and then when Spanish speaking Americans want to put the National Anthem into words that can swell their patriotism, then these fascist fuckers bring up their English language elitism and refer to something that the U.S. does not have, a National Language. I can’t say it enough…Fuck George Bush and every other bigot like him.
cd
Bush pans Spanish “Star-Spangled Banner” – Yahoo! News
NEW YORK (Reuters) – The “Star-Spangled Banner” debuted on Friday with new Latin beat and Spanish lyrics but it did not win a glowing review from
President George W. Bush, who said the cherished national anthem should be sung in English.
Latin American artists recorded “Nuestro Himno” (Our Anthem) to stir immigrants to turn out for a national boycott and marches for rights across the country on May 1. Instead they stirred up the ire of those who see it as further polarizing Americans. One Internet columnist dubbed it “The Illegal Alien Anthem.”
Bush told reporters at a White House Rose Garden news conference the anthem would not have the same value sung in Spanish.
“The national anthem ought to be sung in English. And I think people who want to be citizens of this country ought to learn it in English. They ought to learn to sing the national anthem in English.” 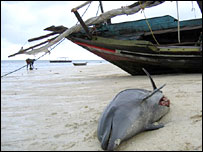