A spider which was thought to be the biggest in captivity in the UK has died at the age of 20.
Lucretia, a goliath birdeater tarantula, had been the star attraction at Stratford Butterfly Farm in Warwickshire until her recent demise.
She was 10in in diameter, about the size of a dinner plate, and originally came from Guyana in South America.
Her handler, Geordie Jackson, said staff were sad at Lucretia’s death, but had found a replacement named Morticia.
“She is certainly not as big as Lucretia, but she will get there eventually,” he said.
“I couldn’t prove Lucretia was the biggest in the country, but she was a huge spider and I don’t think many people would say against it.”
Mr Jackson said it was a myth that the spiders ate birds, but in their natural habitat they fed on small mammals and frogs. 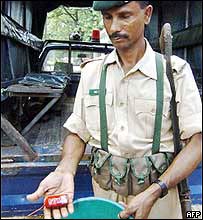