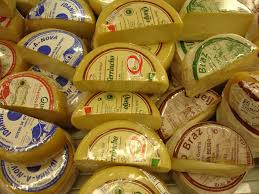 PHOENIX, Arizona (Reuters) – Puzzled U.S. border police arrested a Mexican smuggler with 88 pounds (40-kg) of cheese hidden in a special compartment in his truck, police said on Friday.
Customs and Border Protection spokesman Roger Maier said officers at the port of entry in Columbus, New Mexico, referred a Chevrolet pickup for a routine secondary examination on Wednesday.Officers using an X-ray machine saw the outline of 16 bulky packages stashed in a secret compartment behind the seat, which they initially believed were packets containing illicit drugs.
“Generally if you see something (with the X-ray machine) you expect it to be narcotics, but this turned out to be cheese,” Maier told Reuters by telephone.
Officers regularly impound drugs including marijuana, heroin and cocaine at border crossings from Mexico, although Maier said the smuggled cheese haul was unusual.
“It looks like it was destined for people who wanted a taste of the old country,” he added.
Police arrested the 38-year-old driver, seized the cheese and confiscated the truck because he failed to declare his cargo.
In 2003, border police in the area impounded nearly 800 pounds (360 kg) of bologna as it was being smuggled across the border from Mexico.