(Why does the election in Liberia matter? Charles Taylor still has significant support in Liberia, he bears a large part of the responsibility for the brutal civil war in neighboring Sierra Leone, the UN is leaving Sierra Leone in December, and “Mr Taylor undoubtedly still controls forces which could destabilise the region…” Taylor has also been accused of inciting violence in Guinea and Ivory Coast. Currently he is living in a mansion in Nigeria.)

Liberia’s warlord-turned-president-turned-asylum-seeker Charles Taylor looms large over the future stability of much of west Africa and yet he hardly figured in the recent election in his home country.
He has been indicted on 17 counts of war crimes and crimes against humanity by the United Nations-backed court in Liberia’s neighbour Sierra Leone – accused of backing that country’s brutal rebels.
He is currently in asylum in a mansion in south-eastern Nigeria, which is refusing to hand him over to the court.
Nigeria’s President Olusegun Obasanjo says that would go against the terms of the deal under which he agreed to step down as Liberia’s leader in August 2003, to end a 15-year war and stop rebels from rampaging through the capital, Monrovia, which they were poised to enter.
Now, a new potential solution is being mooted.
It is being suggested that Mr Taylor could be tried by the Special Court for Sierra Leone sitting in The Hague, the court’s chief prosecutor Desmond de Silva told the BBC News website.
For more, see…
BBC NEWS | Africa | Taylor trial may be out of Africa 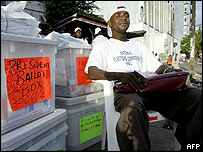