NEW YORK – It was a one-two encounter between
Axl Rose and Tommy Hilfiger. The rocker and designer capped a Thursday evening out at a new club called The Plumm in Manhattan’s Chelsea neighborhood with midnight fisticuffs.
“There was an issue between the two of them,” Plumm owner Noel Ashman told The Associated Press.
The scuffle reportedly started after the Guns N’ Roses front man moved the drink of Hilfiger’s girlfriend, Dee Ocleppo.
“I moved his girlfriend’s drink so it wouldn’t spill,” Rose told the Los Angeles radio station KROQ on Friday. “It was the most surreal thing, I think, that’s ever happened to me in my life.”
According to the 44-year-old singer, Hilfiger, 55, smacked him in the arm and told him to put the drink back.
“He just kept smacking me,” Rose said.
Attempts to reach Hilfiger or a representative were not immediately successful.
Rose was there to play a surprise set for “Rent” actress
Rosario Dawson for her 27th birthday party.
At the time of the dustup, The Plumm was packed with a celebrity crowd including Lenny Kravitz, Mickey Rourke, Kid Rock, Peter Beard, Molly Simms,
Wentworth Miller, Ann Dexter Jones, Lydia Hearst and Damon Dash.
Rose did perform, and dedicated the song “You’re Crazy” to “my good friend Tommy Hilfiger.” 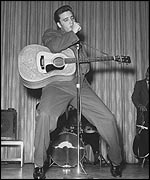