Maybe Charles Taylor can read this to pass the time in Pademba Road prison….

A novel about a child soldier in Sierra Leone has won the prestigious Orwell prize for political writing.
Delia Jarrett-Macauley, a British writer whose parents are from Sierra Leone, was honoured for her novel, Moses, Citizen and Me.
It is the first novel to win the award since the award started 16 years ago.
Ms Jarrett-Macauley wrote the book after hearing a report about a boy soldier who had been recruited to kill his grandparents during the civil war. 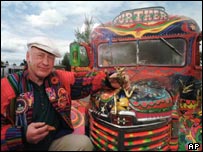