This news is just in, let’s hope that the tsunami today is not a repeat of the 2004 disaster. I’ll keep you updated. If anyone has news from or is in any of the affected areas please forward your information to me and I will post it here.
cd.

update 7/18 10:28 HST An aftershock in Indonesia’s tsunami-ravaged region and a new tremor off the southwestern Java coast sowed fear on Wednesday as the toll from Monday’s disaster climbed to 550

update 7/17 10:04 HST The tsunami that swept through fishing villages and resorts on Indonesia’s Java island killed 368 people and more than 200 others are missing, officials said on Tuesday.

update 10:49 HST Latest death toll is up to 104. “”There are 104 people dead from 10 regencies, 148 people are injured and 122 still missing,” said Putu Suryawan, the official at the Indonesian Red Cross disaster center.” This is certainly a tragedy but it is looking like it won’t be thousands dead, although the damage done will make the lives of thousands of Indonesians even more difficult.

update: 8:06 HST There are no reports of casualties or damage in any other country from Monday’s tsunami.
“Our latest data shows 80 people have died while at least 68 are badly injured. The number can climb because many may have been swept away by the waves,” Fitri Sidikah, an official at the Indonesian Red Cross disaster center, told Reuters.

JAKARTA, Indonesia – A powerful earthquake sent a 6-foot-high tsunami crashing into beach resorts on Indonesia’s Java island Monday, killing at least 69 people, leaving scores missing and sending thousands fleeing to higher ground, officials and witnesses said.
Regional bulletins that the 7.7-magnitude undersea earthquake was strong enough to send a killer wave steaming toward the country worst hit by the 2004 Asian tsunami did not reach the victims, because the nation’s main island has no warning system.
Thousands fled to higher ground along a 110-mile stretch of the densely populated island’s southern coast. The hardest-hit area appeared to be Pangandaran, an idyllic beach resort long popular with local and foreign tourists. Witnesses there said people shouted ”
Tsunami! Tsunami!” and climbed trees or crowded into inland mosques as the wave approached.
Red Cross official Arifin Muhadi told The Associated Press that 69 people were killed, most in Pangandaran, and that 77 others were missing.
“We are still evacuating areas and cross-checking data,” he said.
Metro TV, citing local officials, said that at least three areas along the coast had people dead or missing.
A witness told el-Shinta radio that he saw the ocean withdraw 500 yards from the beach a half-hour before the giant wave smashed to shore, a typical phenomena before a tsunami.
“I could see fish jumping around on the ocean floor,” Miswan said. “Later I saw a wave like a black wall.”
Local media reports said the wave came as far 300 yards inland in some places. Buildings sit close to the beach in Pangandaran and other coastal areas.
Roads were blocked and power cut to much of the area. Damage and casualties were reported at several spots along the 110 miles of beach affected, officials and media reports said.
“All the houses are destroyed along the beach,” another woman, Teti, told the station. “Small hotels are completely destroyed and at least one restaurant was washed away.”
Santi, a tourist at Pangandaran, told The Associated Press said she saw about 20 bodies at a health clinic. Officials at the clinic could not immediately be reached for comment.
Indonesia has installed a warning system across much of Sumatra island but not on Java.
Java was spared by the 2004 tsunami but hit seven weeks ago by a 6.3-magnitude earthquake that killed more than 5,800 people.
Monday’s tsunami was spawned by a quake that struck deep beneath the Indian Ocean 150 miles southwest of Java’s western coast at 3:24 p.m. local time, causing tall buildings to sway as far away as the capital, Jakarta.
The strength of the temblor was revised upward from magnitude 7.1 after a review by a seismologist, the
U.S. Geological Survey said. The quake was followed by a series of powerful aftershocks.
Transport Minister Hatta Radjasa said he had heard reports about a tsunami striking two seaside towns, and urged people living on Java’s southern coast to move inland in an orderly fashion.
“Everyone should move from the beach,” he told el-Shinta.
The earthquake also triggered a tsunami warning on Sumatra and Australia’s Christmas and Cocos islands but the earthquake-spawned waves never topped 7 inches, meteorological officials said. A similar tiny tsunami was recorded on Indonesia’s resort island of Bali.
Indonesia is prone to earthquakes because of its location on the so-called Pacific “Ring of Fire,” an arc of volcanoes and fault lines encircling the Pacific Basin.
The 2004 Indian Ocean tsunami killed at least 216,000 people, nearly half of them in Indonesia’s Aceh province. 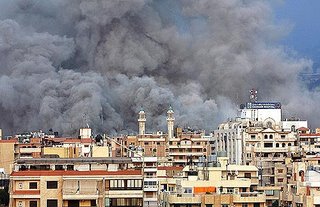