I am a big fan of Arundhati Roy’s writing and of her political sentiments. Here’s a lovely example of both. (And if you haven’t, read her heartbreaking The God of Small Things.)

On his triumphalist tour of India and Pakistan, where he hopes to wave imperiously at people he considers potential subjects, President Bush has an itinerary that’s getting curiouser and curiouser.
For Bush’s March 2 pit stop in New Delhi, the Indian government tried very hard to have him address our parliament. A not inconsequential number of MPs threatened to heckle him, so Plan One was hastily shelved. Plan Two was to have Bush address the masses from the ramparts of the magnificent Red Fort, where the Indian prime minister traditionally delivers his Independence Day address. But the Red Fort, surrounded as it is by the predominantly Muslim population of Old Delhi, was considered a security nightmare. So now we’re into Plan Three: President George Bush speaks from Purana Qila, the Old Fort.
Ironic, isn’t it, that the only safe public space for a man who has recently been so enthusiastic about India’s modernity should be a crumbling medieval fort?
Since the Purana Qila also houses the Delhi zoo, George Bush’s audience will be a few hundred caged animals and an approved list of caged human beings, who in India go under the category of “eminent persons.” They’re mostly rich folk who live in our poor country like captive animals, incarcerated by their own wealth, locked and barred in their gilded cages, protecting themselves from the threat of the vulgar and unruly multitudes whom they have systematically dispossessed over the centuries.
So what’s going to happen to George W. Bush? Will the gorillas cheer him on? Will the gibbons curl their lips? Will the brow-antlered deer sneer? Will the chimps make rude noises? Will the owls hoot? Will the lions yawn and the giraffes bat their beautiful eyelashes? Will the crocs recognize a kindred soul? Will the quails give thanks that Bush isn’t traveling with Dick Cheney, his hunting partner with the notoriously bad aim? Will the CEOs agree?

Oh, and on March 2, Bush will be taken to visit Gandhi’s memorial in Rajghat. He’s by no means the only war criminal who has been invited by the Indian government to lay flowers at Rajghat. (Only recently we had the Burmese dictator General Than Shwe, no shrinking violet himself.) But when Bush places flowers on that famous slab of highly polished stone, millions of Indians will wince. It will be as though he has poured a pint of blood on the memory of Gandhi.
We really would prefer that he didn’t.
It is not in our power to stop Bush’s visit. It is in our power to protest it, and we will. The government, the police and the corporate press will do everything they can to minimize the extent of our outrage. Nothing the happy newspapers say can change the fact that all over India, from the biggest cities to the smallest villages, in public places and private homes, George W. Bush, the President of the United States of America, world nightmare incarnate, is just not welcome.

Bush in India: Just Not Welcome 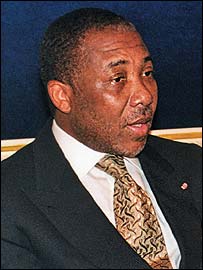