MOSCOW (Reuters) – A top Moscow gallery bowed to religious sensibilities and pulled an exhibit that combined two potent symbols of Russia — a gold icon and black caviar — local media reported Thursday.
Churchgoers had appealed to the state Tretyakov gallery, objecting to “Icon-Caviar,” which depicts hundreds of tiny fish eggs where the face should be on an icon, saying it was trivial and insulting.
The artist, Alexander Kosolapov, told Ekho Moskvy radio that his work was in no way religious: “The icon frame — that’s a metaphor for Russia. The caviar, that’s also a metaphor.”
The work was part of a major exhibition of Russian pop-art, which also includes a picture of the Kremlin under a computer-game-style alien attack.
Art exhibit a rough roe to hoe… – Yahoo! News 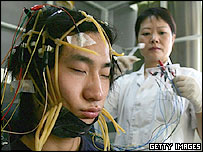