Herod was the ruler behind the biblical “Massacre of the Innocents”. In the event, King Herod the Great ordered the execution of all young male children in the village of Bethlehem, so as to avoid the loss of his throne to a newborn “King of the Jews,” whose birth had been related to him by the Magi. This guy was probably a previous incarnation of George W. Bush.
cd

Archaeologist finds tomb of King Herod
By MARK LAVIE, Associated Press
An Israeli archaeologist has found the tomb of King Herod, the legendary builder of ancient Jerusalem and the Holy Land, Hebrew University said late Monday.
The tomb is at a site called Herodium, a flattened hilltop in the Judean Desert, clearly visible from southern Jerusalem. Herod built a palace on the hill, and researchers discovered his burial site there, the university said.
The university had hoped to keep the find a secret until Tuesday, when it planned a news conference to disclose the find in detail, but the Haaretz newspaper found out about the discovery and published an article on its Web site.
Herod became the ruler of the Holy Land under the Romans around 74 B.C. The wall he built around the Old City of Jerusalem still stands, and he also ordered big construction projects in Caesaria, Jericho, the hilltop fortress of Massada and other sites.
It has long been assumed Herod was buried at Herodium, but decades of excavations had failed to turn up the site. The 1st century historian Josephus Flavius described the tomb and Herod’s funeral procession.
Haaretz said the tomb was found by archaeologist Ehud Netzer, a Hebrew University professor who has been working at Herodium since 1972. The paper said the tomb was in a previously unexplored area between the two palaces Herod built on the site. Herod died in 4 B.C. in Jericho.
Herodium was one of the last strong points held by Jewish rebels fighting against the Romans, and it was conquered and destroyed by Roman troops in A.D. 71, a year after they destroyed the Second Temple in Jerusalem. 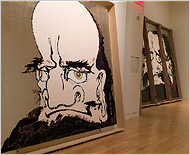