It’s been far too long since I posted a new article about the Dear Leader Kim Jong Il, you know, I admire him for his ability to have huge parties, expensive booze and chicks, and completely ignore the suffering of his people….what a guy. Great review…enjoy it! 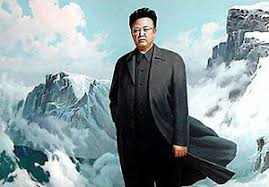 Follow The (Dear) Leader
T@P Do art and culture even exist in North Korea? A new book and a new compact disc open the door — just a crack — on the Hermit Kingdom.
By Richard Byrne
Issue Date: 12.20.05
In Team America: World Police, the puppet-film satire of the global war on terrorism made by Matt Stone and Trey Parker (of South Park fame), North Korean leader Kim Jong-Il is gleefully depicted as an oddball Bond villain: outsized glasses, Elmer Fudd lisp, a streak of maudlin solipsism, and a team of lackeys including al-Qaeda and Alec Baldwin. He even lures United Nations weapons inspector Hans Blix into a shark tank straight out of Thunderball.
This skewering of Kim as pure evil grinding comically along its axis elicits guffaws because it spoofs what little we know about the âDear Leader,â? a vainglorious and wretched dictator who starves his nation and stockpiles nukes. North Koreaâs gates are kept largely shut, impeding tourism and cultural exchange. The train that the odd foreigner is permitted to take to Pyongyang has high cement walls on either side of the tracks. The barriers extend even to language. As State Department translator Tong Kim observed in The Washington Post in September, even skilled negotiators at the six-party sessions tend to talk past one another. âInterpreting North Korea and its intentions is not merely a matter of translating words,â? Kim wrote, âbut of understanding gestures and symbols.â?
Many writers have tried to pry open North Koreaâs shell, and most with limited success. But two new works — one a book, the other a compact disc — that examine the countryâs art, architecture, archeology, and culture for clues about its leaders and people do so with vigor and immediacy. Jane Portalâs concise and brilliant Art Under Control in North Korea (Reaktion Books) and Christiaan Virantâs compilation sonic collage Radio Pyongyang: Commie Funk and Agit Pop from the Hermit Kingdom (Sublime Frequencies) allow Western audiences to see and hear how North Korea became what it is — and where it may be headed.
American Prospect Online – Follow The (Dear) Leader 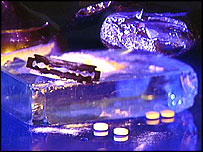