Given my borderline relationship with Thumper, I thought that it wasÂ appropriate to post this.Â Perhaps I should write aÂ “how to” guide on getting a rabbit to be your pimp?Â
-BambiÂ

2) How do I know if a dolphin wants to have sex?A2) There are various ways a dolphin has of showing that she or he is interested in sex.
Males are probably the easiest to detect. They will swim around, sporting an erection (anywhere between 10 to 14 inches long for a Bottle-nose), and will have no bones about swimming up to you and placing their member within reach of your hand. If you are in the water, they may rub it along any part of your body, or wrap it around your wrist or ankle. (Dolphin males have a prehensile penis. They can wrap it around objects, and carry them as such.) Their belly will also be pinkish in colour, which also denotes sexual excitement.
Females can be a little harder. The most obvious way a female dolphin has of displaying her sexual interest is the pink-belly effect. Their genitals become very pink and swollen, making the genital region very prominent. They may be restless, or they may be acting as normal. If you are out of the water, they may swim up to you and roll belly up, exposing themselves to you, coupled with pelvic thrusts. If you are in the water, they may press their genitals up against yours, nibble your fingers, nuzzle your crotch, or do pelvic thrusts against you.
Each dolphins way of expressing sexual readiness varies, so the longer you know the dolphin, the better you will detect when they are sexually active.
Q3) What do I do if a dolphin wants to mate with me?
A3) Accept, if possible! I will go through the steps involved with males and females…
The Male:
When a male dolphin is interested in you, about the only thing you can do, if you are male, is to masturbate him. (Unfortunately, I cannot speak for the female of the human species… it seems women just don’t like dolphins enough… so I cannot say for sure if it is safe to mate with them. I would suspect not, due to a dolphins size, but then again, I cannot say for a woman.) WARNING! In the considerations of safety, you should NEVER let a male dolphin attempt anal sex with you. The Bottle-nose dolphin member is around 12 inches, very muscular, and the thrusting and the force of ejaculation (A male can come as far as 14 feet) would cause serious internal injuries, resulting in peritonitus and possible death. Unless you are the masochistic type, you will have a hard time explaining your predicament to the doctors in the emergency ward….
http://www.sexwork.com/family/dolphins1.html 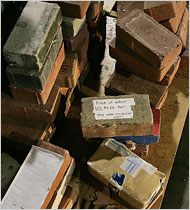