If you don’t know who Ali Farka Toure was or haven’t heard his music…you need to…The world can certainly be a better place and music is a good place to begin. Ali Farka Toure knew this..
cd

BAMAKO, Mali – Two-time Grammy Award winner Ali Farka Toure, one of Africa’s most famous performers, died Tuesday in his native Mali after a long illness. He was in his late 60s.
Mali’s Culture Ministry said Toure died at his home in the capital, Bamako, after a long struggle with an unidentified illness. He was known to be battling cancer.
Across this deeply impoverished west African nation, people mourned Toure’s passing and radio stations suspended regular programming and instead broadcast Toure’s signature lilting sounds.
Toure, one of the original progenitors of a genre known as Mail Blues, played a traditional Malian stringed instrument called the gurke.
Toure was born in 1939 in the northern Sahara Desert trading post of Timbuktu. Like many Africans of his generation, the exact date of his birth was not recorded.
Toure learned the gurkel at an early age, later also taking up the guitar. He cited many Western musicians for inspiration, including Ray Charles, Otis Redding and John Lee Hooker.
He once said in an interview that his songs examined education, work, love and society, according to the Web site allmusic.com. He released at least 10 albums and toured often in North America and Europe.
Toure spent much of his older age in his childhood town of Niafunke, which has become a pilgrimage spot for many music-loving Africans and tourists. 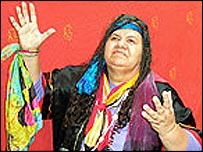