An investigation has been launched after a prominent Aboriginal woman in Australia was left for dead after collapsing at a busy city bus stop.
Singer Delmae Barton, 62, says she lay for more than five hours in a pool of her own vomit after suffering a suspected stroke or diabetes attack.
Her plight was ignored by hundreds of commuters who passed by in the Queensland city of Brisbane.
State officials have apologised and promised an urgent inquiry.
Ms Barton, a well-respected opera singer and indigenous elder, says she believes she was left unattended because of her race.
“I think it did make a difference,” she told ABC radio.
Ms Barton said that after collapsing at the bus stop, near a university campus, one man moved his briefcase away from her.
“And there were girls and young women who sat on the seat next to me and other seats around, they never came around to help,” she added.
Japanese students eventually came to her rescue, calling an ambulance to take her to hospital. 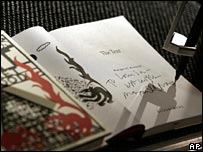