Okay…some people just shouldn’t even think about committing a crime…the universe has a way of making this clear…like this guy as reported in the Oct. 25, 2005, editions of the Milwaukee Journal Sentinel and at The Obscure Store.
2 drivers ram robber; suspect shoots self
Suspect also shoots himself during crime gone wildly awry
By JOHN DIEDRICH
jdiedrich@journalsentinel.com
Surely this wasn’t how the stickup was supposed to go down.
After making off with some cash, the robber was struck five times by two vehicles – first by someone police think was the suspect’s own getaway driver and four more times by another driver who appears to have been trying to intervene.
Toward the end of the strange scene, the beleaguered bandit accidentally shot himself in the leg – then got hit a fourth time by the second driver, a woman who apparently knew the victim.
Here is the scene, as painted by police Inspector Vince Flores:
At 2:45 a.m. Sunday, a 33-year-old man was standing in a parking lot near N. 14th and W. Center streets. A 29-year-old man rushed up to him, pulled a handgun and demanded cash, which the victim handed over.
Meanwhile, a pickup truck – which police think was the robber’s getaway ride – screeched up in reverse, but instead of spiriting the robber away, hit both the suspect and the victim, apparently by accident.
Then the pickup bolted, leaving the robber to limp away with the cash.
That’s when the woman, behind the wheel of a Lexus, put the suspect in her sights, Flores said.
The woman rammed the robber with the front of her car.
Then backed up and hit him again. And again.
After the third hit, the man reached into his pocket to pull his gun, but shot himself in the leg. That’s when the woman hit the robber with her car a fourth time.
Police showed up and arrested the suspected robber, who was not identified, and sent him to the hospital.
They also nabbed another man, who may have had nothing to do with the melee but was spotted running from the scene.
The suspect was listed in critical condition Monday at Froedtert Memorial Lutheran Hospital.
The robbery victim was listed in satisfactory condition, also at Froedtert, a hospital representative said.
The woman driving the Lexus is being sought. 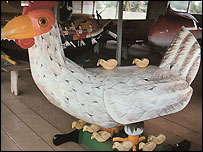