The eccentric North Korean dictator Kim Jong-il has hired doubles to carry out his more mundane tasks, according to South Korean intelligence officials.
While Kim himself attends major state occasions, two men stand in for him for more routine visits to tractor factories or farms.
“They are the spitting image of Kim — the same age, same height and with the same bouffant hairstyle and pot belly,” a South Korean news agency quoted an intelligence official as saying.
“They are trained to behave like him and even had plastic surgery to enhance the resemblance.”
The official also said that assassination was a fear for Kim, an indication of the troubles that lie beneath the surface of North Korea’s totalitarian politics.
Kim is also believed to have been ill with diabetes and kidney disease.

Telegraph | News | Dictator hires doubles to do the boring jobs 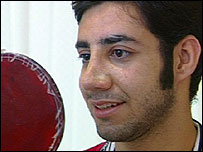